Not only does he sing, he does a fair amount of preaching, too, which is, according to Guy, a big part of why he left the Gaither Vocal Band to go solo: To be able to share the message God has given him in song and in spoken word in a way that is more difficult singing with a group. “I have an opportunity at this stage in life to open up from the inside. I’ve got time on the stage to develop some things that are close to my heart right now — philosophically, musically. I’ve kinda been saying, jokingly, ‘I got 14 years of preach all pent up in me; I gotta get it out!'”

Our concert at Benson Great Hall on the campus of Bethel University in May 2012 exemplified this well. One of our MCs turned to her husband during the concert and exclaimed, “We’re in church!”

All tolled, just short of 1,000 people showed up to see in person for the first time in years — and solo for the first time ever! — a musician who is beloved by Gaither Vocal Band fans around the world. Some of Guy’s extended family showed up for the concert. That made him feel right at home and we could sense it in his entire delivery.

One attendee who has attended a plethora of Christian concerts over the years said without reservation, “Best concert I’ve ever been to!” 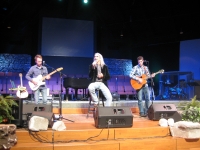 More in this category:Music for the Master Launches Official Web Site »