Jerry Dallin, of THE SONGMASTERS, suffered a heart attack on November 25, the day after Thanksgiving. He subsequently underwent an 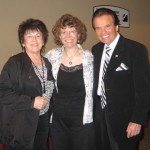 Praise the Lord that the surgeon was a wonderful Christian man who has performed over 7,000 heart operations and asked Jerry, Ginger and their two daughters if he could pray with them before the surgery. He prayed Jesus right into the room!  Amen!

What a shocker this event was for someone who has walked two miles a day, six days a week, for 30 years. ”It was only because of God’s divine providence that we got there in time, because Jerry was just about to take his walk when we decided, rather, to drive to the hospital,” Ginger said.  He was taken by ambulance to North Memorial Robbinsdale. The doctor said that had he taken that walk he most likely wouldn’t be here today.

Jerry and Ginger ask for your prayers. ”We count as dear friends the many people we have sung to for 57 years. ‘The doctor said Jerry should be back to singing the Gospel very soon and better than ever! We would love to sing the Gospel of our Lord until He comes again, and then for all eternity!”

More in this category:« GET YOUR APRIL 2017 BOOTH BROTHERS TICKETS – ON SALE NOW!Get Your Ernie Haase & Signature Sound Tickets Here! »